An array of photographs at Jahangirnagar University

A snapshot can tell a story. A series of snapshots can capture communities, livelihoods and lifestyles. This was the impression of many a viewer at an exhibition held at Shaheed Minar premises, Jahangirnagar University (JU) recently.
Organised by Mrittika, a magazine on rural lifestyle and heritage, the display narrated stories through images accompanied with captions.
About 80 photographs were put on display during the two-day exhibition titled Bolshal Bringni Mandirang (Shalboner Mandira), where students became aware of the discrimination against a minority community -- Mandis.
Rajkumar, Probir Kumar Sarkar and Ripon Chakma -- three freelance photographers of JU, have excelled in capturing memorable moments in the lives of the subjects.
The fight against land encroachment, the struggle to establish community rights and to uphold the cultural heritage are the predominant themes. Deforestation is depicted in Ekjon Garjon, the only photograph with a title in the exhibition, which highlights the reality of the forests now. Once a deep woodland, the sal forest in Modhupur is being occupied by non-local trees like akashmoni and eucalyptus. A garjon tree still survives alone, with all its profound pride and beauty -- despite practices of cultivating pineapple or banana and cutting down the forest.
Other subjects, such as a day in the life of a Mandi van-puller forced to leave his ancestral occupation and adopt an alien one, birth of the next generation, a smiling Mandi girl, are effectively captured in the frame with due attention to colour and light. Traumatic cultural and religious conflicts have also been depicted through a series of photographs. 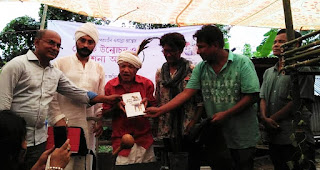